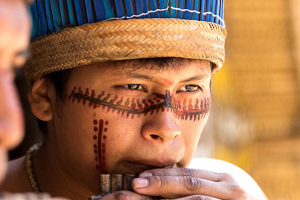 Various tribes have their own traditions and legends about the origins of Kambô.

A Kaxinawá legend from Huni Kuin people of Brazil.

Legend has it that once upon a time the Kaxinawa tribe of the Upper Amazon were struck down by a mysterious disease and became very ill and medicine man or Pajé  – also known as Kampu – tried desperately to cure his tribespeople who were incredibly sick he used all kinds of medicinal herbs and nothing was helping the tribespeople to relieve them of their agony and suffering.

Kampu decided to venture into the Amazon jungle on a vision quest where he drank the sacred plant medicine Ayahuasca at sunset. That night, in answer to his prayers, the Spirit guardian appeared in his vision. Beckoning him to the trunk of an enormous tree, and luring him with her gaze, she flicked her eyes upwards so that Pajé Kampú would follow her gaze. He noticed the leaves moving high in the tree as if there was something there.

To Pajé Kampú’s surprise, rustling in the leaves, he noticed a bright green frog. What was the purpose of this green frog and how could this helpless creature help him