Sole is the perfect blend of water and natural salt that has reached its saturation. The solution arrives at 26% (26 parts of salt to 100 parts of water), it is saturated and becomes Sole. 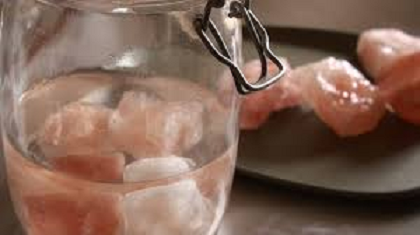 Sole is simply a living food source. It reestablishes order from chaos in our body transporting and releasing and excreting toxins and superfluous waste.

Sole water brine has been known as the foundation for the creation of life and is unquestionably the energy matrix in which life begins, develops and subsists.
When water and salt connect, the negative poles of the water molecules surround the positive ions in the salt, and the negative ions in the salt are surrounded by the positive polarized particles of the water molecules. This changes the geometrical structure of the water and the salt, and creates something entirely new, a third dimension. The water is no longer water and the salt no longer salt. The elements have liberated themselves from their restrictions, given up their polarities by the resonant effects and reached a higher form of energy.
The sole solution is the “mother soup” of all life forms and a flexible, physical representation of pure sun and light energy. The word sole is derived from the Latin word for sun “sol”, as it is the liquid materialization of sunlight. Sole means “liquid sunlight” or “liquid light energy.
The American chemist Stanley Miller proved that all creation began in the ocean. He showed how electric charges, place in a sole, started to collect amino acids and combine organic matter. Although fascinating, it’s not completely accurate to say that life was created out of practically nothing. In fact, life is created out of everything, or better still, the “all” that is, because the natural crystalline sole contain all elements that exist on Earth. Our body consists of the same elements as water and salt. Even the ratio of concentration in our blood is the same as that of the primordial ocean. If all life comes from the ocean, then we can observe this process in the growth of a fetus in the womb encased in amniotic fluid, in 1% water and salt solution (one-part salt, 100 parts water) – a natural salt solution called sole, is from the origin of the word, directly connects to the word “soul”. Beginning from the day of conception, the embryo passes through all developmental stages of evolution. One single cell to a human being with consciousness, all born from the same “soul”.
Salt has the same fundaments importance to our life as water. We can not survive without water or salt. All the properties of salt that relate to our body are closely connected to water, because the crucial properties of salt-biochemically as well as biophysically-only exist in combination with water.
Salt in its original form, natural, as it has crystallized in the Earth over millions of years. We are not talking about your standard supermarket table salt – sodium chloride which has been chemically cleaned and reduced to the combination of sodium and chloride. Essential minerals and trace elements were removed as impurities. Sodium chloride is an unnatural isolated, unwholesome substance having nothing in common with salt. Sodium chloride is an aggressive substance and the result of consuming common table salt in the formation of overly acidic edema, or excess fluid in the body tissue. That’s why doctors tell you to avoid salt. For every .035 ounces of sodium chloride that cannot ne eliminated, the body needs 23 times this amount of its own cell water to neutralize the salt.
Healing effects
Neutralizing forces of salt can cancel out or negate harmful electromagnetic pollution in our environment.
It reestablishes order from chaos in our body transporting and releasing the toxins and superfluous waste products in our body, allowing the body to excrete it.
Maintains vital functions in the body such as osmosis, the foundation fo cellular metabolism is controlled by salt.
Stimulates peristalsis in the body which in return stimulates the metabolism and digestion
Creates electrolytes which improve the body’s conductivity and stimulates circulation eliminating cramping
Allows the body’s electrical current to flow
Normalizes blood pressure within 15 minutes of taking it
Balances the acid-alkaline imbalance within the body
Weakens addictions
Restores the body’s natural frequency pattern and can hold this vibration for over 24 hours
Cleans the intestines and heals skin diseases
Restoring and harmonizing the acid/alkalinity balance in the body
Flushes out heavy metals in the body such as mercury, lead, arsenic and amalgam
Flushes calcification out of the body by breaking apart the molecular compounds freeing the body toxins, mucous plaque in the intestines and other waste materials.
Treats gout, arthritis or rheumatoid arthritis, by slowly breaking down the deposits, metabolizing and releasing them.
Helps metabolize and release kidney and gallbladder stones.